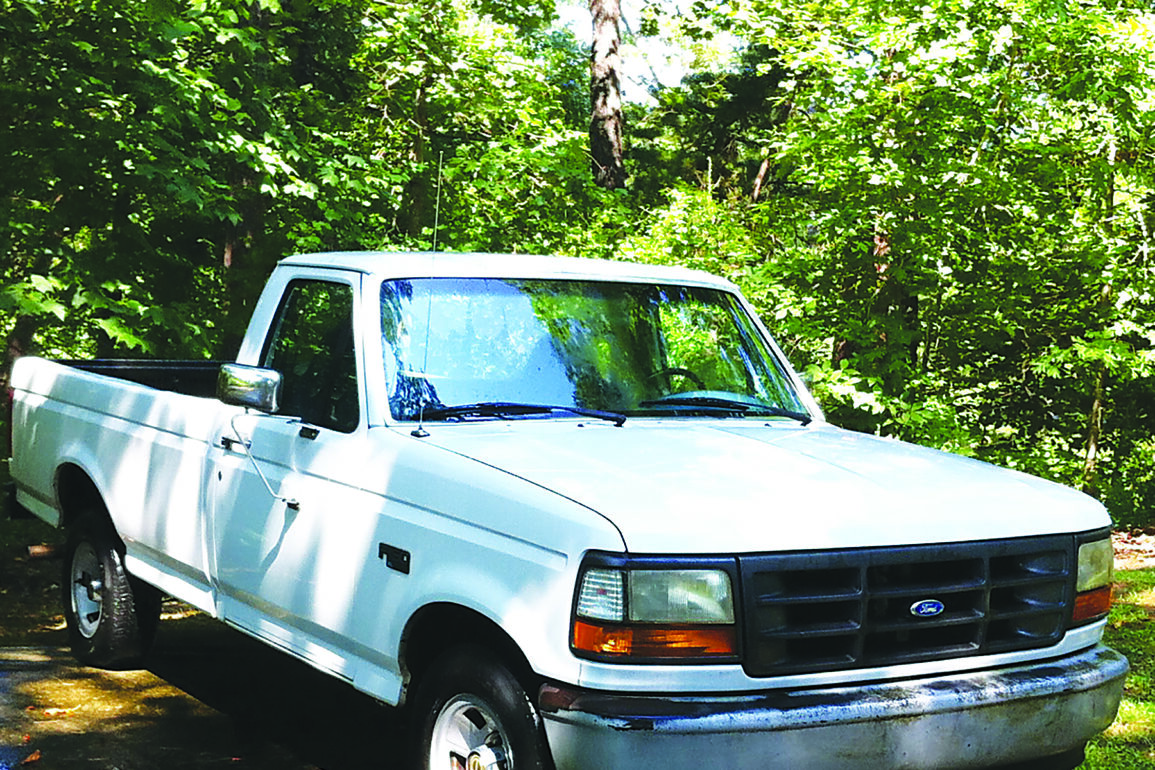 My truck and I go way back.

Twenty-five years to be exact.

We’ve endured a lot together. For instance, 15 years ago a tornado/micro-burst felled a giant oak tree across my truck. The insurance company totaled it, but I didn’t have the heart to send my old truck to the junkyard. Instead, I had a body shop replace the busted windshield and straighten the bent fenders, hood and crushed cab top. No new paint job though. It’s uncouth down South to drive a working truck that looks brand new.
Then the cracked windshield pandemic descended on my truck. Two cracked windshields were replaced in six weeks. The third and current damaged windshield remains. It’s not a pretty sight, a prominent eye-high pock mark on the driver’s side, but I refuse to replace it. Why? “All new windshields will get damaged. Old damaged windshields never suffer a second damage.” Ten years later, my old truck has suffered no second windshield damage.

Critters are attracted to my truck. A snake once took up residence under the passenger seat. It’s also obliged numerous suicidal deer crossing hits over the years. But little deer or truck damage was ever sustained. Time and miles rolled on.

Six years ago, my old truck received some serious critter damage. Sparky, a rambunctious squirrel, assaulted it. He sabotaged the ignition system—gnawed several wires in two. Sparky’s demolition took me half a day to mend.
Two years after the squirrel assault, my truck sounded like it was coming down with COVID-19. A wrecker hauled it to the nearby dealership for treatment. A new transmission was needed. The cost was high, but my faithful old truck deserved the best. Another year rolled on.

Then it started spitting and sputtering and like me, lost its get-up-and-go. Again, a wrecker ride to the dealership. Two weeks later I was charged for replacing the fuel pump for the rear gasoline tank. But the service manager wanted to keep my old truck. “It’s still not running quite right,” he said. “I need to drive it a while to determine its problem.”

A month passed. The dealership called and said, “Another problem was found and fixed. Pay your bill and come get it.” Over-excited, I rushed over to get my old truck.

It ran for only another month. The spitting and sputtering came back. After delivering me home one last time, my old truck died in my driveway. Never did it crank again. There it’s sat for four years.

Three weeks ago, bored with retirement and all the COVID-19 TV drama, I got a bright idea. I’d restore my old truck. Though I’m not an auto mechanic, I did some trouble-shooting. I discovered the fuel pump and tank level sensor for the rear tank weren’t working. This was the same fuel pump I’d paid the dealership to replace.

With limited tools, I removed the worn out fuel pump and level sensor. But first, a hazardous job had to be done: removing the gasoline tank. Without a lift rack or any means to remove the truck’s entire bed, this task was only slightly easier than childbirth. In the sweltering summer heat, flat on my back I went to work loosening rusty bolts.

Removing the gasoline tank required lots of elbow grease, WD-40, and insect repellant. I prevailed and got ’er done. Next the fuel pump and level sensor were removed. Something didn’t look right about them. The new fuel pump the dealership had allegedly installed only four years earlier looked old and worn. But I now had a bigger problem: Finding a replacement for the defective old “new pump.”

Two different dealerships were visited to buy a new fuel pump. Neither had one to sell me—“the manufacturer no longer makes fuel system parts for old trucks like yours” they told me. One dealership service manager confirmed something I didn’t want to believe: The fuel pump I had personally removed was 25 years old and was in fact the original equipment from the factory.

I don’t like to internet shop, but I had no choice. Immediately several fuel pump vendors popped up on my computer screen. I ordered and received one in three days. This, too, became a headache. This new pump was defective. It was a fire hazard waiting to explode.

I called my fuel pump vendor and reported that the part I’d received had flattened tubes and cut holes. A Far East lady with a flat accent told me she’d send me another pump “wory sun.” Like the first pump, it arrived in three days. It was identical to the first received pump—defective.

I telephoned the Far East lady again to report the second received defective pump. From her telephone I heard something most unusual, something I hadn’t heard since my childhood. It was bantam roosters crowing.

Speaking loudly over their crowing, the Far East lady assured me my money for the two defective pumps would be returned. The roosters stopped crowing. She said goodbye. I’m still waiting for my refund.

Internet shopping again, I looked for fuel pumps made only in the USA. None was found. The closest fuel pump vendor to the USA was located in Quebec, Canada. From them I ordered, received and installed a good quality pump last week. Its installation instructions were in French, but no problem. There was yet another bugaboo: my old truck’s “Quick Connect” fuel lines were rusted. Twenty-five years of accumulated rust made them “Non-Quick Disconnect” fuel lines. They’re presently soaking in penetrating oil. Tomorrow I’ll send a letter to the owner of the fraudulent dealership who four years ago charged me for, but did not replace the fuel pump on my old truck.