Dream me back home 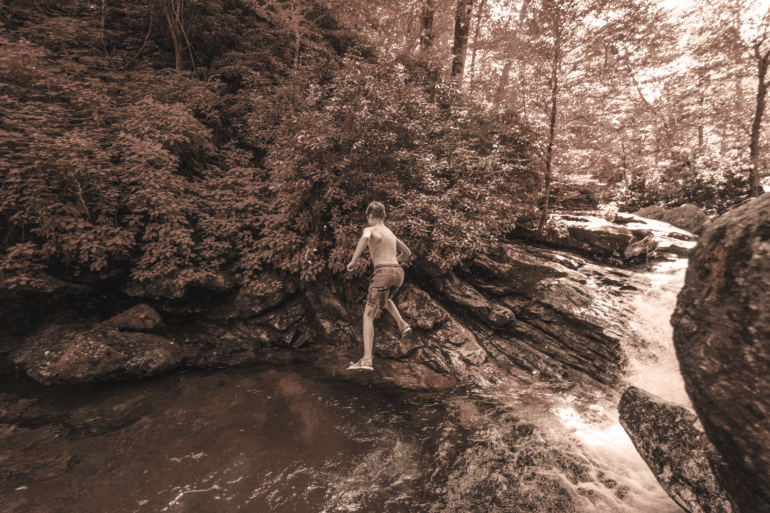 I’d had a sleepless night. Near daylight I drifted off into yesteryear. It was the late 1950s, and I was a kid again. Our farm was way over there in the foothills of the Great Smoky Mountains. From our barn’s hayloft you could see the end of the world.

McCaysville, Georgia was the closest town. Deader than General Custer, it was as far north as one dared go without encroaching into Tennessee or North Carolina. From its single amber 24/7 flashing light our farm was about three miles out.

The dream didn’t include my uncertain nothingness days of childhood labor. Lord knows I don’t miss them, especially hoeing corn on the rough side of those rocky hillsides. It’s true, sleeping dogs are better left alone and Forrest Gump was dead right: “Sometimes I guess there just aren’t enough rocks” (to throw at bitter memories). My dream was a euphoric trip down Memory Lane. I relived the good times on a leisurely walk from the farm into McCaysville. My destination: The Show, aka The Georgia Movie Theater. Along the way I saw people and places I hadn’t seen in decades.

Going to The Show was a BIG DEAL for a farm boy. All week I’d daydream about it. On Saturday nights McCaysville was the glowing and glitzy place to be.

If sunset was in sight and if the cows had been milked, the hogs slopped, the mules hayed and watered, and if I had a quarter, then off to The Show I’d hoof it. Sometimes neighborhood boys would walk along together. Our dogs – tongues hanging, tails wagging, but never barking – would try to follow us. We’d act like we didn’t know them and scold them to go back home.

The other kids and I thought nothing of walking. When bored we’d sometimes trot. Nowadays it’s called jogging. We boys were well conditioned but followed no athletic rules. When finished trotting we’d roll ourselves a P.A., a rolled smoke from a thin red can of Prince Albert loose-leaf tobacco.

The Old Epworth Road, a path more mud than gravel, was the first leg of my trek. After I leaped across Mill Creek, its path meandered deep in the woods, up a two-mile incline. Neat houses with push-mowed lawns appeared where this dirt road changed to pavement. Another quarter mile, it dead ended into Georgia Highway 5. From there, it was a left, descending Harper Town Hill. At the foot of this hill the marquee and flashing lights of The Show would come into sight.

Climbing out of the hollow I reached the dead end where stood four stores: two on the right, two on the left. Across the two-lane highway was the Twin Cities Drive-in. Frank Newman’s place on the far right sold grocery stuff, but he also carried dopes (ice cold sodas), Prince Albert, candy bars and other goodies. The first time I ever felt wealthy was when Newman’s paid me a penny each for a filled tow sack of empty dope bottles I brought them.

Next door was Poley Stepp’s neat-as-a-pin store that was much like Newman’s. He had a quick smile and a howdy for everyone, even kids like me. In my dream Poley still flaunted a bright white shirt and a gold chain that drooped from his belt loop to his pocketed timepiece. He kept a ginormous display of candy. I didn’t eat Snickers. Always seemed like something you wouldn’t want your mom to know you’d done. Strange what a kid believes.

Next was Gene Pack’s Service Station – like Wally’s on Mayberry RFD, but busier. His help gassed cars, checked dipsticks and fixed flat tires. Gene’s salutation was most unusual. Instead of a “hello” or a “howdy” he greeted you with “and then what happened?”

Going left down Harper Town Hill on Highway 5 there were two small stores. They hugged each side of a tiny green house where a swing dangled from the ceiling of the front porch. The first store belonged to Mr. Mull. Thin and bespectacled, he slicked down his jet black hair distinctly on the side. A quiet man, his countenance was that of a funeral director. Tick tock clanked the clock on the wall of his store. Sparse were the shelved items. As a kid I’d stared at the top shelf wondering what was inside that blue box labeled Kotex. Like a jailkeeper, Mr. Mull eagle-eyed from behind a display of sweet treats incarcerated inside a glassed-in cabinet. To make a purchase you politely spoke a choice. Only after placing your coins on the counter would he release the imprisoned pick.

Sloppy Joe’s Place was on the other side of the green house. It was owned by Clarence Hill but operated by Anne Phillips. The atmosphere was totally different from Mr. Mull’s store. You opened a squeaky front door and the smell of fried bologna and Juicy Fruit gum punched your nose. Stepping up into this cramped treehouse-like place, one’s eyes were pulled to a green tinted glass box. Inside were gigantic jars of Red Hots, Jaw Breakers and Candy Canes. Penny candy and baseball card bubble gum were freely within reach. Straight ahead, down from the payout counter stood grungy bar stools. Clarence was usually parked on one, greeting everyone who entered with “Come on in neighbor!”

He was a big, rawboned guy. Resembling Mel of Mel’s Diner, his face was off-centered. With his anchors aweigh tattooed forearms resting alongside the pickled egg jar on the bar, he’d smoke Camels clear down to their nubs. He listened to the local AM radio station, WLSB, with great attentiveness. He’d twist his bushy eyebrows and switch his toothpick from corner to corner of his mouth. I always wondered why he needed that toothpick. He was toothless.

The nearby Copper Company miners often stopped at Sloppy Joe’s to shoot the bull with Clarence. He listened to everyone’s story. Anne spoke little. On the wall behind the cash register were rows and columns of cigarette packs, blocks of chewing tobacco and cans of snuff.

Toward the back of the store hung a curtain. Behind it white bread bologna sandwiches, hamburgers and hot dogs were prepared. Another kid had told me they were knock-your-socks-off good because they were soaked in beer. I never ate any of it because one day the veil was left open and I saw something gross. Clarence, dressed in his usual grease-spotted T-shirt, his big knobby elbows jabbing the air, leaned over the sink frantically scrubbing his false teeth and spitting hockers. The same sink where he fixed food.

The next store was called Cook’s Grocery. Johnnie Cook was a licensed butcher. His store was modern and like big city supermarkets, gave out S&H Green Stamps. In my dream, I shied away from Cook’s, fearing I’d be arrested by the law if they saw me there. You see, during the rationing years of World War II, my dad was a bootlegger. He was one of Johnny Cook’s suppliers. So, as a kid, I thought my dad had sold Johnny Cook moonshine. Not so. Mom divulged my Dad had illicitly sold him sides of beef, mutton and pork, all raised and processed on our Mill Creek Farm.

Then came Sinter’s, a before-its-time small Walmart. At the entrance to this close to the road store three scrawny men always sat, hats on heads atop their bony faces. Lined up side by side like toads ready to leap, they hunkered down on their heels, backs to the wall. Each chewed tobacco. Spitting across the sidewalk and toward the highway, their wads didn’t always make the target. It accumulated on the sidewalk and stunk but didn’t seem to bother them. When you walked by they’d stop whittling their cedar sticks, flash gummy smiles and say “Howdy do.”

The livin’ is easy

Next on the left about two buildings away was an even larger store—two stories high. In my dream the name escaped me. On its wooden slat floor, hoops of cheese and big stick bologna were sliced to order.

Other stores lay ahead, but in my dream I didn’t stop in. Town was nearing. I was getting excited. Down the hill I made a few more steps around the bend. That granite monument still parted the highway: the McCaysville – Our Heroes War Memorial.

Running late, I veered left, rushed on and crossed the road. I didn’t want to miss the movie previews and cartoon at The Show.

More dazzling than Las Vegas, there it was straight ahead—The Show. Small white façade lights pulsed and flashed. The sky glittered like it was the Fourth of July and fireworks were being shot from atop Tater Hill! A ticket line had formed.

Fresh buttered popcorn aroma wafted through the evening air. Pretty girls in tight skirts fidgeted, smacked gum and blew pink bubbles while primping their teased hair. Teen boys with flattops pushed and shoved one another. One bent his knees trying to look younger so he might get a cheaper under 12 ticket. Another mimicked James Dean. He palmed a lit cigarette to look like a tough guy. Teen couples held hands. Inside the dark theater they’d sit on the back row and make out. The odor of Old Spice permeated the air.
Suspense built as the line crawled forward. It was great to be there! But as a farm boy I felt a bit out of place.

One at a time I raised each foot to see if anything from the barnyard had stuck on the soles of my shoes. See no evil. Smell no evil. Finally, I was up next to buy my ticket. I didn’t know what movie was playing but was always happy to be gone from the farm and at The Show. Looking right I read the main feature: Godzilla vs. King Kong.

That’s when blinding lights and a grumpy, vaguely familiar voice awoke me. She said, “Hey old man! You gonna sleep all day? Get out of that bed! Coffee’s getting cold.”

The Show was fix’n to start.