Cousins by Blood, Sisters by Heart 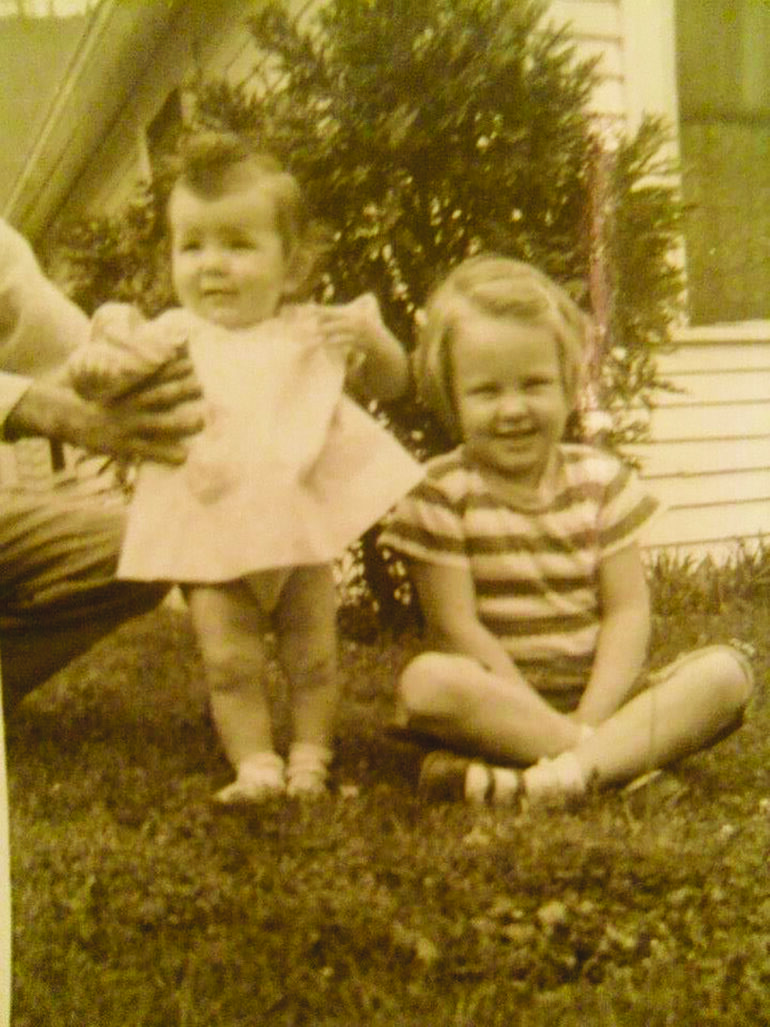 My Robyn flew away yesterday.

Robyn is my first cousin. She had visited for almost two weeks, which sounds like plenty of time.
It wasn’t.

She was raised in Canton, Ohio. Her parents moved from Chattanooga, Tennessee when she was around 3.
Her mother was my daddy’s older sister. She and Robyn came every summer and spent from the first part of June till the middle of August here, staying at our grandparents’ house. Neither of us can remember our childhood summers being spent any other way.

As you can imagine, we spent an enormous amount of time together, playing, walking, reading, helping string and break green beans on the front porch, picking wild blackberries, swimming, visiting my friends and mingling with the other set of first cousins when they came to town.

If something came up and we were separated for a few days, we didn’t like it.

Every August, leaving was a tearful event for everyone concerned. Robyn and her mother, our grandparents and me.

We wrote to each other during winter months. I still have a few of those letters somewhere.

They continued to visit till Robyn graduated high school and got married shortly thereafter. Then her mother came by herself, or when Robyn’s father retired, he came with her mother.

For a few years, Robyn and Sonny, her husband, would visit. My husband and I met them once in the mid-‘80s, and we vacationed together.

She came when our grandmother died.

I went to her when her mother died.

She came when my daddy died.

When Robyn’s first son was born, she visited with his tiny self.

When my daughter was born, she came down and helped me for a few days.

Time went by; she had two more sons. We talked on the phone but didn’t see each other, making do with occasional photographs of the growth of our children.

One day I got a call, and she was very distraught. One of her lifelong friends was dying of cancer, and Sonny had taken a job in Indiana. They were moving from the only place she’d ever remembered living. She told me she’d call me as soon as she got a new cell phone number (back then if you moved out of an area, you had to get a new phone number on your cell, just like you do a land line) and that Sonny had promised as soon as they got settled in, she could come for a week and he’d take care of their boys.

I couldn’t wait for her call, and eagerly anticipated a long overdue visit.

And then…nothing. It was like she’d disappeared. I had no way to call her. I never talked to her much older half siblings (her mother had been married before). I was sure if she had died someone would call me.
I hoped.

After about 15 years, her half-brother called asking me to get some information for him at our courthouse. I asked about Robyn and he said, “I had to get your number from her. She said she just knew you were very angry.” I told him no. Bewildered. Confused. Not angry.

Still, I heard nothing.

From time to time, I’ve wondered why I didn’t get Robyn’s phone number from him then. Or why he didn’t offer it. Was it pride on my part? Was it fear? I just don’t know.

One day, about 11 years ago, my phone rang. I didn’t answer it because I didn’t recognize the number. But then my cell phone started ringing. By the time I could get to it, it stopped. I checked and there was a message on my land line. It was Robyn. Her sons had given her a trip for Mother’s Day to walk part of the Appalachian Trail in Georgia. They’d shortened the trip because of rain, and one of her boys had fallen and hurt his ankle. Could she meet us somewhere for lunch and then maybe go to our house for a while? They were only an hour or so away.
It had been almost 22 years since we’d seen each other, and around 17 years since I’d heard from her.
The reunion was sweet.

Later, we talked about her long absence. She told me she became pretty depressed because of the move and her friend dying on top of that. She never left the house unless it was school related for her sons. She stayed in a tiny, tiny world she created.

One day she went to the post office and realized the town was a lot like this town in size, and how everyone seemed to be friendly and know one another. It was at that point she began to come out of her shell and make a life for herself there. But so much time had gone by she was afraid to call me, fearing what I would say to her.
When we met up, we vowed never to lose contact again, and we haven’t.

She came that same year the day after Christmas for a few days. This was only the second time we can remember her being here in the winter.

After that, she has come almost every summer, only missing a few times (COVID, anyone?).

Robyn used to laugh and say when we were real old women she’d move in (I think she was assuming we’d be “widder wimmin”) and we’d sit, string and break beans and talk and read in the evenings.

Well, we ain’t widder wimmin, but we did string and break beans on the back porch, with help from my daughter. It was fun. You could almost feel the spirit of our grandparents; it brought back such strong memories. And we did pile up every night and read.

We’ve tried not to regret those lost years, because after all, you can’t change the past. We raised four fine children between us. Robyn is even a grandmother now.

And, Lord willing, we’ll see each other every year for years to come.

Till next time, Robyn. I can hardly wait!