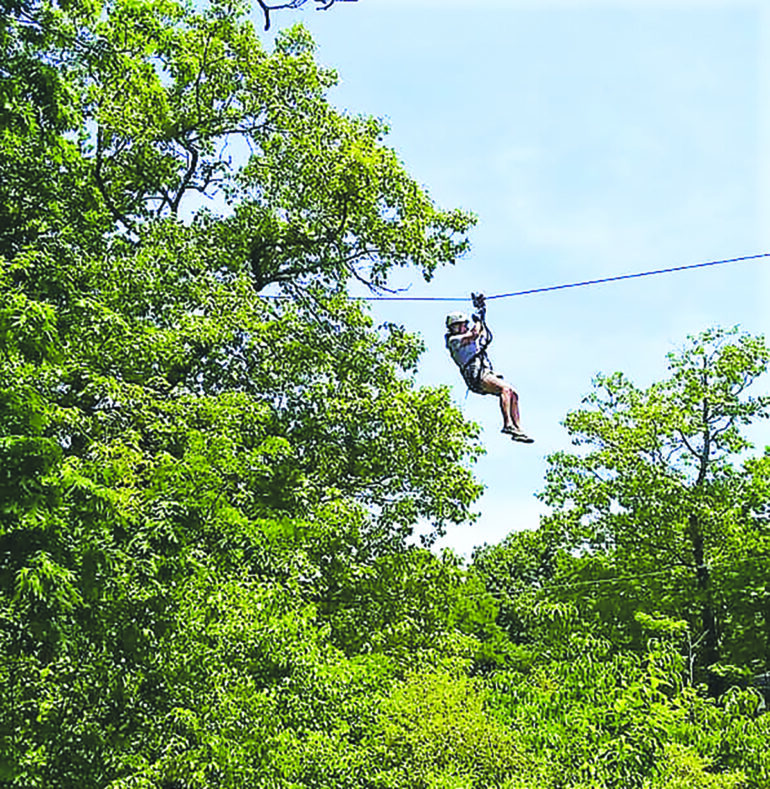 Well, I have always wanted to try ziplining and recently got my chance when we took some guests to visit the Amicalola State Park to admire the beautiful mountain views and waterfall.

It was there I discovered the ziplines that were operating at the top of the mountain where a three-level course was set up. After getting some information on the cost and hours of operation I was “compted” a free trial run and in exchange would write about my sky-high adventure!

I made arrangements for the following week and was greeted by the manager, Doug Timms, who had recently been promoted at the zipline tours and is also a current student at a local college working his way through school there.

I was directed to the hotel lobby where a small group also waited to be brought to the main canopy of trees where our two friendly tour guides would give us instructions for our tours.

I quickly made friends with a local father-daughter team who had already experienced the ziplining and helped to put my slightly apprehensive mind at ease! The two young tour guides were also funny and occasionally joking with us as they readied us into the harnesses and helmets.

Some participants had already experienced ziplines, but most were like me – just newbies for the anticipated high flying fun. Our instructor Dalton made it sound very simple and easy as it was, so after strapping ourselves into the harnesses and putting on the hard hats we were ready for our zipline adventure!

There is really little to it, mainly just having to remember to keep your left hand holding the clip above your head (right hand for lefties) to steady yourself for the ride and then with a little encouragement, off you go!
I had opted for the level one zipline as it was a slightly shorter course and entailed about four different ziplines and a rather shaky ladder to walk on above the canopy between two of the ziplines, no worries though as you were always safely strapped in.

The course lasted close to an hour, and I was even offered to extend my fun to level two had I desired, although with hesitation, yes really, I opted out having enough thrills for the day!

Honestly I would definitely do it again and promised my young tour guides next time I would do all three levels as well.

I really enjoyed the feeling of that “almost flying” sensation although there was one moment I must admit, against my tour guides’ instructions, when I was supposed to “brake” the speed prior to landing at the tree platform, I incorrectly used my right hand to slow my speed and my heart skipped a beat for just a second!
I loved the beautiful scenery and the adrenaline rush as well as the feeling of “I can do it” after returning to the familiar safety of the ground once again.

After my fun experience I had the opportunity to speak with Manager Doug to get some more info on the zipline adventure and discovered that there are a total of 11 ziplines owned by Screaming Eagle Adventures in many of the southern states as well as another close one at the Unicoi State Park in Helen, where a zipline crosses a lake.

When asked the difference about the three ziplines at Amicalola, Doug explained that the level two was a bit longer and faster and the level three was higher with a more “feeling of flying” experience as it went from mountain to mountain.

If you are thinking of going, anyone can do it with the exception of younger children as you must be at least 8 years old and weigh at least 50 pounds and there are some exceptions to women and men who exceed a certain weight limit as well, due to safety precautions.

When I asked Doug who was the oldest person who had tried the course, he said a 92-year-old female had and she really loved the experience and made it back safe and sound!

The zipline tours are open seven days a week with the exception of major holidays and the hours of operation are 8:30 a.m. to 5:30 p.m. but Doug suggests you call ahead in advance for reservations and especially on inclement weather days when the ziplines may have to close for safety issues.

There are many other ziplining companies throughout Georgia and many other states as well with a variety of different courses and high flying and safe experiences.

If you ever wondered how such an adrenaline pumping adventure came into being you would be surprised to know that ziplines have been around for more than 100 years.

Prior to being a fun experience they were used as a necessary form of transportation for some and also for the transferring of food and supplies as well as other necessities.

They began in the mountains of the Himalayas and the Alps as a way of transferring items back and forth among the people.

It wasn’t really until by chance in the 1970s that a student from a California university – while visiting Costa Rica as a graduate student to study the animals there – came up with a plan to rise above the thick canopy of trees to enable the study of the animals below better. Then in 1979 he developed a zipline that would actually carry him quicker from tree top to tree top.

Needless to say the idea of the zipline spread quite quickly after the media caught wind of it, and soon it became a fun adventure for many people looking for that little adrenaline rush. Over time it became a tourist attraction in many areas and now we have 72 countries with commercial courses and more than 400 courses in the U.S.

Currently New York boasts the longest and highest zipline on Catamount Mountain with a zipline where guests can fly at an elevation of more than 600 feet and at speeds of up to 50 mph!

But if you think that is something I recently learned that a new zipline is being constructed that will beat even New York’s record with the new Dell Zipline Adventure at Chula Vista Resort in Wisconsin called the “Soar Like an Eagle” course.

The course is a parallel line which will send dueling racers over a 10-story-high racing competition stretching nearly half a mile!

While I have always liked the feeling as though I am flying, I will modestly reject such an adventure myself and keep it to the tad bit slower courses right around my own hometown here in the North Georgia Mountains!