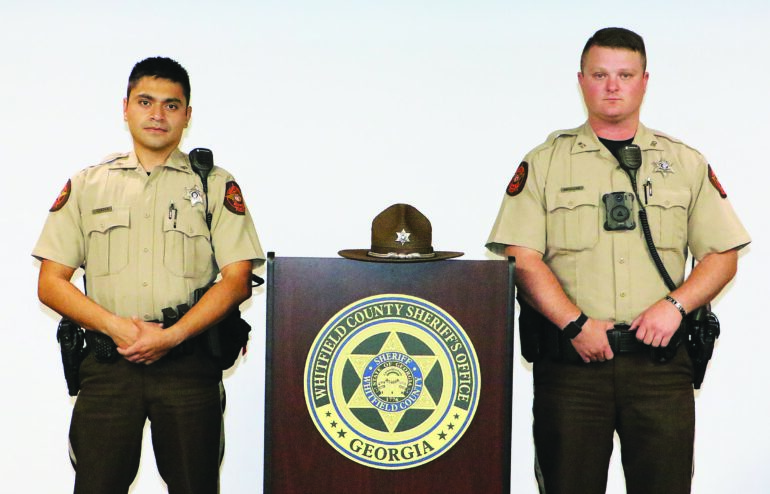 After successfully completing 11 weeks of mandate training, two history-making recruits in the Whitfield County Sheriff’s Office are on the job.

Deputies Edgar Corona and Micheal McClure are the first recruits chosen for Sheriff Scott Chitwood’s new Deputy Training Program, which breaks the tradition of having newcomers start out in the Detention Center and work their way into the Patrol Division.

Instead, Corona and McClure have already been spending plenty of time behind the wheel of patrol cars. They will soon be on their own after completing several weeks with veteran Field Training Officers who are watching their performance and sharing their knowledge accumulated after years on the job.

“We’re graded on how we drive, how we communicate with people, how we go about policing,” Corona explains. “We’re doing exactly what law enforcement officers are doing when they’re by themselves. We just have a supervisor right next to us watching us, seeing how we do things. It’s literally the same thing – we’re on the radio, we go to court, we go get warrants, we go arrest people for warrants, stuff like that.”

Already, the two officers have been on the job long enough to realize that no two days will ever be the same.
Corona’s first arrest was of an elderly woman accused of shoplifting at a local supermarket, while McClure broke the ice chasing down a suspect on foot.

“I was expecting someone much younger to be in this type situation,” Corona said of his initial arrest. “I told her, sorry, ma’am, they want to press charges, and I’m here to uphold the law. I just handcuffed her, and that was that.”

Meanwhile, McClure says what turned into his first arrest was just going to be a routine stop to let the driver know his headlight was burned out. “He fled from us in his vehicle, and then he got to the end of the street and couldn’t go anywhere so he got out and ran off on foot,” he said. “He hurt himself during the run, so he was already on the ground by the time I got up to him.”

What was going to be a helpful stop turned instead into a big headache for the suspect. “I don’t think he’s been to court yet, so I don’t know what they’re gonna charge him with,” McClure said. “We were just gonna stop him and let him know his headlight was out, and that’s when he started running. All he had to do was stop, and we’d say, ‘hey, here’s a warning, get your headlight fixed.’ Now he’s in more trouble. Running’s never a good idea. You’re gonna get caught one way or the other.”

The two deputies want the public to know they chose a career in law enforcement primarily to help others, not for a power trip.

“Everything I learned at the academy was important really,” McClure said. “Having sympathy for people and just knowing your job, learning how to talk to people and understand their situation, you know, putting yourself in their shoes is a big thing. We’re here to help people, victims. Yeah, punishment is part of it – you do something wrong, you break the law, there’s consequences to pay for it.”

Corona says it’s been “rewarding when you go out and you do something and actually see it affect other people.”

He points to an instance when he had to comfort the children of a mother being treated by emergency workers after she had a medical emergency at a store. “Luckily, the mother was OK, she was stable, and we were able to handle the situation pretty good,” he said. “It’s one of those things where it’s kinda hard to explain. It’s very rewarding, way more than I expected.”

With the ongoing shortage of law enforcement officers, the two new deputies say they recommend the job for others with the right mindset.

“I would recommend it, yes, if your heart’s out there and you want to make a difference,” Corona says. “If you really want to make a difference in a new generation of law enforcement, I recommend it. But it takes a special individual to do it because there are some bad things that you will see. It takes a special person to be able to calm down and to just really, really know what you’re getting yourself into. But I would definitely recommend this to somebody who’s willing to put in the work and is willing to go and do something for the community and the county.”

Adds McClure: “It’s a different life so you gotta want to do this profession. This isn’t a profession, you know, where you just wake up and say, hmmm, I might want to be a cop. It’s not like that. You gotta have the want to serve your community. It takes somebody special to do this job, not saying that we’re all high-and-up special people, but you have to have the mind-set for it.”

Corona, who earned a degree in Criminal Justice last December from Dalton State, says joining the force has been like a dream come true for him.

“I get excited when I put on the uniform,” he says, laughing as he adds, “not the vest – the vest is kinda itchy. When I was a kid, I always wanted to be in law enforcement. Now, right before I leave, I’m thinking, man, this is real, this is really happening.”

The uniform is more than just clothing, by the way. The long list of equipment carried by an officer includes two sets of handcuffs, mag, taser, tourniquet, baton, flashlight, gun, radio, and body cam.

McClure says “it was crazy” the first time he “actually got to wear the uniform and put the badge on and have my name on this uniform – yeah, I was happy, I was proud.”

He says every day is different, and every day carries new obstacles, new calls. “I haven’t had the same day twice so far,” McClure says. “I mean, one day you respond to an elderly person having trouble breathing, one day you’re chasing somebody and doing all these reports.”

Corona knows it’s “very, very important” to know the laws, “but I think the most important thing is how to talk to people and don’t take yourself too serious and show people that you’re there to help them – if they need you, they can call you. I know 911 is a number you should definitely call when something goes bad and you shouldn’t hesitate or think, oh, I don’t want to see a police officer. Because we’re there to help others.”