SHUFFLEJUNKIES: Off in a new direction 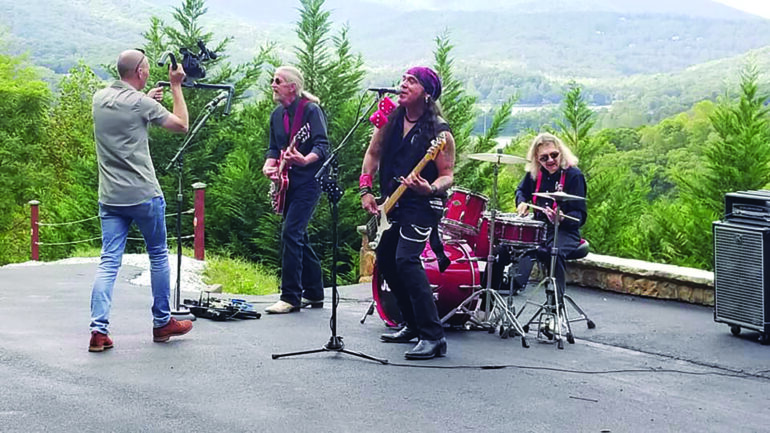 Just before the pandemic hit in early 2020, Roger Shepheard retired from his job with a construction company. That doesn’t mean he’s been sitting in a rocking chair and playing shuffleboard at a Florida condo ever since, though.

Instead, Shepheard says he has been busier than ever, heading his already-popular Shufflejunkies band in a new direction with the help of two permanent bandmates, bass player/vocalist Steve Rangel and drummer Charlie Sanders.

Under the old Shufflejunkies format, Shepheard had compiled a list of 50 or 60 pro players in the area, and he’d secure gigs and then use that list to fill the holes in the band’s lineup. “When COVID hit and everything shut down for two months in 2020,” Shepheard tells The Best of the North Georgia Mountains, “we lost every gig on the calendar. At that point, I rethought the direction of the band and decided I’d really like to have full-time dedicated players. And that’s where Steve Rangel came in.”

Ironically, the two artists had met at one of the Rocco’s Pro Jams, monthly sessions held at the popular Jasper pub the first Sunday of each month from 2 to 5 p.m. The 71st such Pro Jam is slated for Feb. 6, and the Shufflejunkies will be there on the heels of filming a new multi-camera performance video in conjunction with Rocco’s on Wednesday, Jan. 26 at 7 p.m. “We want to invite as many people as we can to this event,” Shepheard says. (Check the band’s Facebook page to confirm the time.)

Rangel – who moved to Georgia three years ago – has a 40-year career in the music business, starting out as part of an ‘80s hard rock band that opened for groups like Ratt, Warrant, and Poison back in the day and then spending another 25 years playing the blues in Texas.

Described by Shepheard as a “mover and shaker,” Rangel has indeed shaken up the Shufflejunkies’ setlist and their gigs. “You know, he makes it happen,” Shepheard says of Rangel. “When I say moving and shaking, Steve’s why we have a music video and an original song now because he drives us and makes things happen. And then we have our new drummer, Charlie Sanders, who’s doing a fantastic job for us. Great player, very devoted.”

Rangel says one of the worst things that can happen to a band is to fall into a comfort zone. “You have to be willing to evolve; you have to be willing to go with the flow. And if you get in a comfort zone, oftentimes you stop growing. I give Roger a lot of credit because he’s been doing this for a very long time. He brought me in specifically for the band to evolve out of playing just blues because the Shufflejunkies was really noted for blues. And I love blues. That’s really where my heart is. But I’ve also done a lot of classic rock, Southern rock, R&B, oldies, and Roger encouraged that. He wanted me to come in and expand the direction of the band. And we’ve done that musically, adding our own originals as well.”

Rangel has also been busy expanding the band’s social media presence. In fact, if you check out The Shufflejunkies Band Page on Facebook, you can see a video (shot in Hiawassee) of “If I Ever Get to Memphis,” a new high-energy song penned by Rangel during his time in Texas.

“When I was out there,” Rangel explains, “I learned that every year in Memphis, they have a blues competition, where all the major cities would pick a band to send there. So in Texas, everyone talks about getting to Memphis – well, if I could just get to Memphis, if I just get my opportunity to go to Memphis, I can show them all what I can do. So that’s really where the song came from. It’s all about getting to Memphis to get your break in the blues business.”

Rangel says the band hadn’t really focused on social media in the past. “Something I’ve learned over the years is that it has really become a necessity to promote a band with social media,” he says. “Roger gave me the green light to go ahead and start a new Facebook page, promote everything on a Facebook page, and we’ve been able to add a lot of followers over this past year. Roger keeps everything up on our website (shufflejunkies.com), but we also post the videos, pictures, updates, and create events on Facebook as well, always looking for new followers. I’m really proud of the Facebook page because again, it was a real indication of Roger being willing to evolve and not just stay in the comfort zone with the type of music we’re playing as well as the social media presence.”

After spending the last six months producing better marketing and promotional material, the band is now ready to focus on booking larger shows, festivals, casinos, “just kind of bigger venues to mix in with our local gigs,” Shepheard says.

As for his late-2019 retirement from his “day job,” Shepheard says it was the “best decision” he ever made, pointing out he’s busier now than when he was working full-time and playing music on the side. He also took time to thank his wife Vicki for “putting up with my crap for 40 years and never complaining.”

The band’s busy schedule, of course, includes the aforementioned Pro Jams at Rocco’s, which have turned into “somewhat of an event and not just a Pro Jam,” Shepheard says. “We’ve had people that have never missed all 70 shows that come out the first Sunday of every month, between 2 and 5, to catch the fun. So we want to make sure to invite everybody out to the Pro Jam at Rocco’s every month!”

In fact, Shepheard says he “can’t say enough about Rocco’s and Rocco himself. I’ve been doing business with Rocco now over 12 years, and he is a mover and shaker in the music business with his support of local bands and national acts – because he’s getting big shows coming through there. He just doesn’t stop. So a big shout-out to Rocco and Matt and Troy, who run sound, and Bubba Man, who’s head of security and is an icon at Rocco’s.”