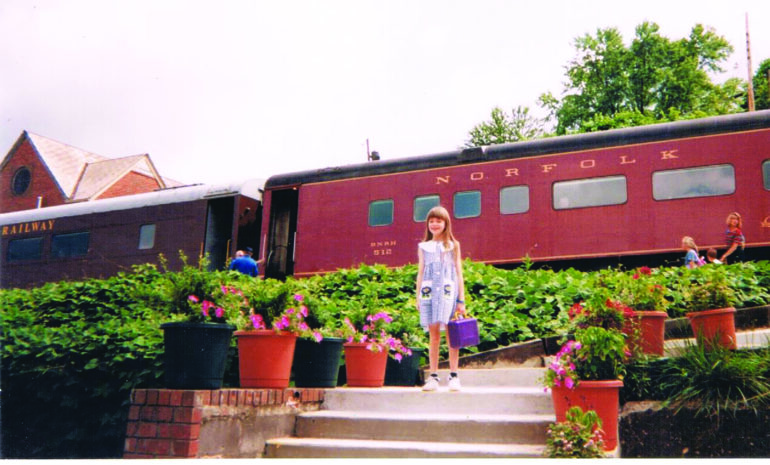 A few days ago I ran across some photos. And it brought back memories. Not just the memories of that day, but memories of my own childhood and memories of the stories my mother told me.

When I found out my husband had never ridden a train, I immediately began to set that horrible wrong to right.

Our daughter was about 8 years old. I got on line and purchased three tickets to ride the Blue Ridge Scenic Railway. It’s a four-hour round trip that goes from Blue Ridge, Georgia, along the Toccoa River to McCaysville, Georgia and Copperhill, Tennessee. There is a two-hour layover to eat lunch, to put one foot in Georgia and the other in Tennessee, which fascinated our daughter. You have time to do some shopping, then climb back on the train to Blue Ridge.

Why was this so important to me? Because as a child I rode from Ellijay to Etowah, Tennessee with either my grandmother or my great-aunt.

My mother’s family has a history with the railroad, and I got to enjoy the last remnants of it.

I would get dressed up in my Easter dress, pack a bag and hop on. Everyone was dressed up in their Sunday best. A trip was not to be taken lightly.

I often spent a week with my great-aunt in Etowah before heading back home. Sometimes I got to ride the train back, but usually my grandparents fetched me in the car.

I remember being fascinated with the toilet on the train, because when you looked in it you saw the rails. It was just an open hole!

I remember coming back from the bathroom once and the train lurched a little and I wound up sitting in an older man’s lap! I was terribly embarrassed, but all the adults got a good chuckle out of it.

I often made friends on the trip, as other children were aboard, too.

But my mother’s history with trains is much richer than mine.

Her daddy’s brothers were both employed by the L&N. Coke Sawyer was trying to help get box cars back together that had become uncoupled when somehow part of the train punctured his chest.

He lived about a year afterward, until infection in his chest killed him (this was before antibiotics). He was 29 when he died. The year was 1919.

The other brother was Alba (they called him Albie). He was a conductor. He also died from a railroad incident. He was standing and the train gave a terrible lurch and he lost his balance, striking his head and knocking him out. He had occasional headaches, but other than that seemed okay, until years later he began to act strangely. One day he got off the train in Etowah, as usual. He always walked home. They lived two streets over. But this day he couldn’t find his way home. The doctors found a large tumor on his brain. There was evidence of damage, and they asked had he ever had a hard lick to his head. The answer, of course, was yes. The tumor was inoperable. He died at age 62 in 1953. My mother was pregnant with me.

Alba and his wife were childless, so they doted on my mother. She spent a lot of time with them, especially in the summer when they camped and fished. Her aunt even took her by train to Washington, D.C. before she was 12 years old.

But when she was a very little girl, she would go and spend a few days. She always rode the train.

I asked Mother, “Did you ride by yourself?”

I up and quit third grade!

Of course, she really wasn’t by herself. The conductor knew who she was, as I’m sure the rest of the workers did.
She remembers once, when she got on the train in Ellijay, the conductor presented her with two kittens to play with on the trip.

They always took her out on the caboose when they traveled the Ocoee River so she could look down at the water, and see people across on the other side.

She remembers that when she went back to Ellijay, her aunt always packed a delicious dinner, which she couldn’t wait to eat.

She rode back with the mail bags, which were unloaded in Ellijay as she got off the train.

One scary memory I have of trains was on a Saturday morning when I was around 9 years old. I was with my daddy, and we’d gone to pick up ironing from a woman who was paid to do for us. We were on Industrial Boulevard and about to cross the tracks. He barely got the car backed up before the train flew by, missing us by inches. No arms had gone down, no lights had flashed giving us any warning. Scary!

And the last good memories: in the 1970s I lived in the upstairs apartment of where the Cajun Depot restaurant is now. Trains were still running fairly regularly. We had some friends who were going away for the weekend. All their children save one had been farmed out. The one who had no place to go was their 16-year-old son and they asked could he stay with us. Of course, we said yes. Sometime in the wee hours of the morning a train went flying by. The boy was suddenly standing in our bedroom door in his tighty whities yelling “Earthquake!” He’d been awakened from a deep sleep and was scared to death. We assured him it was the train, and he was beyond embarrassed.

Sometimes at night a passenger train would go by. They were moving slowly as they were leaving the depot. I could get on my knees at my bedroom window and look down on people sitting in the cars. It would be night and the cars were alight. People were reading, eating, chatting with one another. They never knew I was watching.
How I wish we had trains here today! Just think you could hop on and get off in Canton for your doctor’s appointment. Or ride to Woodstock to visit a friend. Or ride to Blue Ridge and shop downtown.